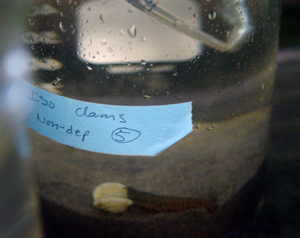 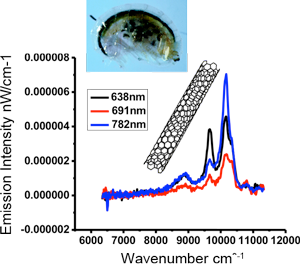 Single-walled carbon nanotubes (SWNT) are unique manufactured carbon nanomaterials used in a variety of consumer and electronic products.  If released into the aquatic environment, these materials may cause deleterious effects on organisms such as fish and invertebrates.  Previous work in our laboratory has shown that SWNT associate with natural particulate matter, and will therefore likely deposit in sediments after discharge to the aquatic environment. The objective of this research project is to assess the toxicity and bioavailability of SWNT to benthic organisms as well as their effect on the toxicity and bioavailability of co-contaminants.

SWNT are hydrophobic structures and other hydrophobic organic contaminants (HOCs) have been shown to strongly sorb to the surface of SWNT. Our lab is investigating whether SWNT will decrease the bioavailability of these HOCs through sorption, or whether they will act as vectors that increase the HOC body burden in benthic organisms. We are also interested in examining the influence of SWNT electronic structure (e.g. metallic vs semiconducting) on both biological uptake of the SWNT and sorption of HOCs to these nanomaterials.

These experiments contribute toward the overall goal of determining the environmental impact of SWNT in a benthic estuarine system. Environmental release is inevitable, and it is important to determine any detrimental effects before they occur so that regulations can be put in place to minimize these effects.